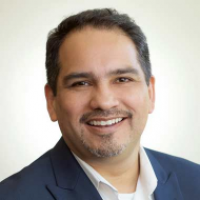 Having taught at Houston ISD, Brownsville ISD, in the state of Minnesota, and at IDEA FCP, Rolando was promoted to principal of IDEA Frontier College Prep in 2007. The school earned top 1% rankings in Texas while he was principal and is now routinely ranked among the very best high schools in the nation. He earned his bachelor’s degree from the University of Houston and his MBA from the University of Sioux Falls. He holds teacher, principal, and superintendent certificates.

Rolando was promoted to Executive Principal in 2010 and to VP of Schools in 2011, where he led his high schools to national recognition and 100% college acceptance & matriculation, in which 85%+ of students qualified for free or reduced lunch. Rolando moved his family to San Antonio in 2012 where he launched and grew the region to twenty-eight schools in 8 years; in August 2021 the region will reach 30 schools in 9 years of existence. Most recently IDEA SA had 76% of its schools projected to be “A” rated on the internal rating system 20-21 school year. IDEA Carver College Prep is now ranked 17th best high school in the nation, and 4th best in San Antonio. San Antonio has 260 of 260 seniors accepted and on-track to matriculate to college in August 2021, from four schools: Carver, South Flores, Monterrey Park, and Walzem.

As we reach more families in more communities with the “College for ALL!” mission, Rolando will manage & coach all IDEA Executive Directors outside of Texas and the San Antonio ED.