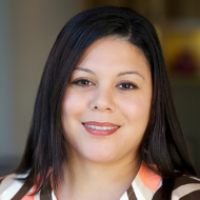 Angie started her journey at IDEA Quest College Prep as an ELA and Humanities Teacher. In 2007, she was promoted to Dean of Faculty and Students at IDEA Quest, which is now in the top 1% of high schools in Texas. Later, Angie took her expertise to the national team and became the Director of Student Intervention and then Director of Primary Program. In 2010, Angie started her first principalship role at IDEA Alamo. She has launched and led 8 IDEA Schools across RGV, Austin, and San Antonio; she earned IDEA’s Turn-Around Campus of the Year in 2012 and the What Ever It Takes Core Value Award in Central Texas in 2013.

During the past seven years, Angie has managed a total of 17 IDEA schools as a Sr. VP of Schools. As she coaches and develops principals, her portfolio currently has 67% of schools projected to be “A” rated for the 20-21 school year. As one of Angie’s portfolio powerhouses, IDEA Carver College Prep is ranked 38th best high school in Texas and 4th best in San Antonio; 100% of Carver CP seniors will be matriculating to college for the third year in a row.

As one of our San Antonio Leaders, Angie has increased student persistence by 17% in 6 years by creating systematic operating mechanisms and driving the professional development of leaders. She also has improved Pre-K – 2nd grade DI outcomes through strategic collaboration and her management of DI Program Managers for the past five years; SA has lead in DI most of the year.

Angie’s hunger to become the best servant leader that she can be has made her an exemplar in continuous improvement. Her loyalty and commitment to our community, our IDEA families, our scholars, IDEA SA leaders, SALT, and to Rolando Posada, as the outgoing leader are simply inspirational. We are excited to see Angie transition to the Executive Director role and know that San Antonio will continue to grow in number of schools, scholars, and staff members.