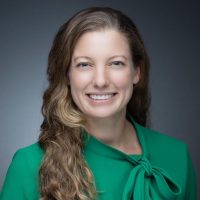 Jill Dominguez received her bachelor’s degree in Biology from The University of Texas at Austin and is a graduate of the Uteach program.

After graduation, Jill joined Teach for America in the Rio Grande Valley where she taught physics and chemistry at Pace High School. In 2006, she became a founding math teacher at IDEA Frontier College Prep in Brownsville. That same year, she also received the Exxon Mobil Teaching Award.

Jill became IDEA Frontier College Prep’s Principal in December 2010, leading the school to a state Exemplary rating and Texas Business and Education Coalition Awards for being in the top 1% of schools in the state. Under her leadership, IDEA Frontier College Prep significantly improved their ACT scores, doubling the number of students scoring at the college-ready benchmark and tripling the number of students scoring above a 24 in one year. In 2010, Jill also received her Master of Arts in Educational Leadership from Columbia University Teacher’s College.