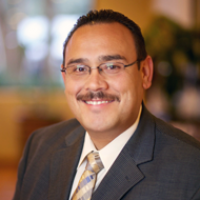 Ernie Cantu was born on June 20, 1970 in Caldwell, Idaho to migrant parents. He was raised in a colonia in south Pharr, Texas called Las Milpas. He graduated from Pharr-San Juan-Alamo (PSJA) high school in 1988.

He joined the U.S Army soon after graduating and served his country until 1991 mostly overseas in West Germany, and during Operation Desert Shield/Storm in Saudi Arabia, Iraq, and Kuwait.

In 1992, he began attending the University of Texas Pan-American (UTPA) in Edinburg, Texas. He graduated in 1997 with a Bachelor of Arts in History with a minor in English. Shortly thereafter, he began teaching 7th grade English Language Arts at Alamo Middle School (PSJA) in Alamo, Texas. In 2000, he began teaching GED and ESL classes for Windham ISD at Lopez and Segovia State Jails in Edinburg, TX.

In 2003 he began working at IDEA Public Schools as a part-time after school and Saturday school tutor and as an adult ESL instructor. In August 2004, he transitioned fully from Windham ISD to IDEA Public Schools to teach 6th grade math at IDEA Academy in Donna, Texas. In December of 2004 he received a Master’s in Education from the University of Texas Pan-American.

Ernie is currently in his thirteenth year at IDEA. He has worked at four IDEA campuses, Donna, Frontier (Brownsville), San Benito and Pharr, and has been a founding staff member at three of them. During his time at IDEA Public Schools he has been a classroom teacher, Director of New Site Development, Director of Operations/Assistant Principal of Operations, Principal at IDEA College Prep Pharr, which is located in the same colonia, Las Milpas, where he was raised, a Senior Vice President of Schools, and most recently, Executive Director of IDEA El Paso.

A graduate of the Educational Leadership doctoral program at the University of Texas Rio Grande Valley, Ernie now resides in El Paso with his wife, Cindy, his daughter, Klarissa, and his son Ernesto Emiliano.