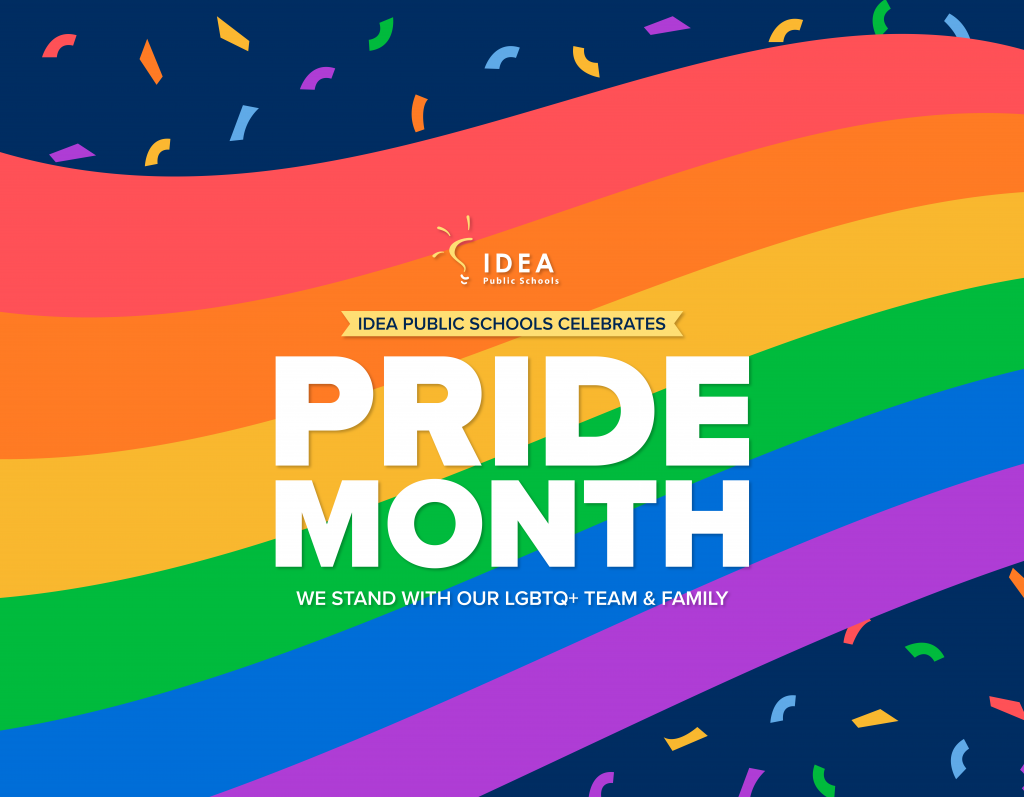 IDEA Public Schools is proud to celebrate Pride Month throughout the month of June! This annual celebration commemorates Lesbian, Gay, Bisexual, Transgender and Queer/Questioning (LGBTQ)+ contributions and achievements in our history and how this community has strengthened the diversity and progress of our nation. Pride also serves as a reminder of the continued work to achieve equal justice and equal opportunity for LGBTQ+ Americans.

LGBTQ is an acronym for lesbian, gay, bisexual, transgender and queer or questioning. These terms are used to describe a person’s sexual orientation or gender identity. As we continue our mission of college for all and to become a more anti-racist and anti-bias organization, we want to strongly affirm that IDEA Public Schools stands with our LGBTQ+ Team & Family!

Each year, Pride Month is celebrated in June to honor the 1969 Stonewall Uprising (Stonewall Riots) in Manhattan, a catalyst for the Gay Liberation Movement in the United States and around the world. This historic event marked a turning point in American history – elevating the call for equality, understanding and cultural acceptance.

In 1950, Harry Hay founded the Mattachine Foundation, one of the nation’s first gay rights groups. Though it started off small, the foundation, which restructured to form the Mattachine Society, quickly had local chapters in several parts of the country and, in 1955, began publishing the country’s second gay publication, The Mattachine Review.

In 1970, at the one-year anniversary of the Stonewall Riots, New York City community members marched through the streets in commemoration of the event. This march is now considered the country’s first gay pride parade.

In 1998, President Clinton issued Executive Order 13087, which expanded equal opportunity employment in the Federal government by prohibiting discrimination based on sexual orientation. In June 1999, President Clinton issued Proclamation No. 7203 for Gay and Lesbian Pride Month. Ten years later, President Obama issued Proclamation No. 8387 for Lesbian, Gay, Bisexual and Transgender Pride Month, acknowledging the contributions of LGBTQ+ Americans in promoting equal rights to all regardless of sexual orientation or gender identity and in broader initiatives such as the response to the global HIV pandemic. (Library of Congress)

Our mission is to support all children, regardless of gender, sexual orientation, race, skin color or economic status, to succeed to and through college. We champion this month as an additional opportunity to celebrate our diverse Team & Family and educate our students and community on the triumphs and struggles of LGBTQ+ history and the work ahead of us as a nation to achieve educational equity and social equality.

The late 2010’s marked victories for the LGBTQ+ community, including the repeal of the “Don’t Ask, Don’t Tell” policy for military service members and the legalization of same-sex marriage by the U.S. Supreme Court in 2015. Though there has been some significant progress for the LGBTQ+ community, we also recognize that throughout our nation’s history and still today, discrimination and violence toward this group still prominently exist.

Across the nation, the LGBTQ+ community, and more recently the transgender community, is still working to overcome a severe lack in universal workplace anti-discrimination laws, an increasing number of “religious liberty” state laws, which allow businesses to deny service to LGBTQ+ individuals due to religious beliefs, “bathroom laws” that prevent transgender individuals from using public bathrooms that don’t correspond to the sex they were assigned at birth and more. During this time of uncertainty, we stand with our LGBTQ+ Team & Family! To our gay and lesbian communities, our transgender community, our bisexual community, our queer and questioning communities and so many others – we see you, we hear you, and we support you. You have a place here at IDEA Public Schools, and we will do everything we can to create a learning and working environment where you thrive.

As we reflect on and celebrate the unique contributions of the LGBTQ+ community in American history, we should also aim to engage in meaningful discussions about diversity, equity and inclusion, LGBTQ+ history and culture and the issues affecting these communities today. By educating, empowering and encouraging our young people, we are all working together toward progress and the hope of a better tomorrow.

Read more about the history and celebration of Pride Month at loc.gov/lgbt-pride-month. Resources for the LGBTQ+ community and students can be found at thetrevorproject.org/resources. 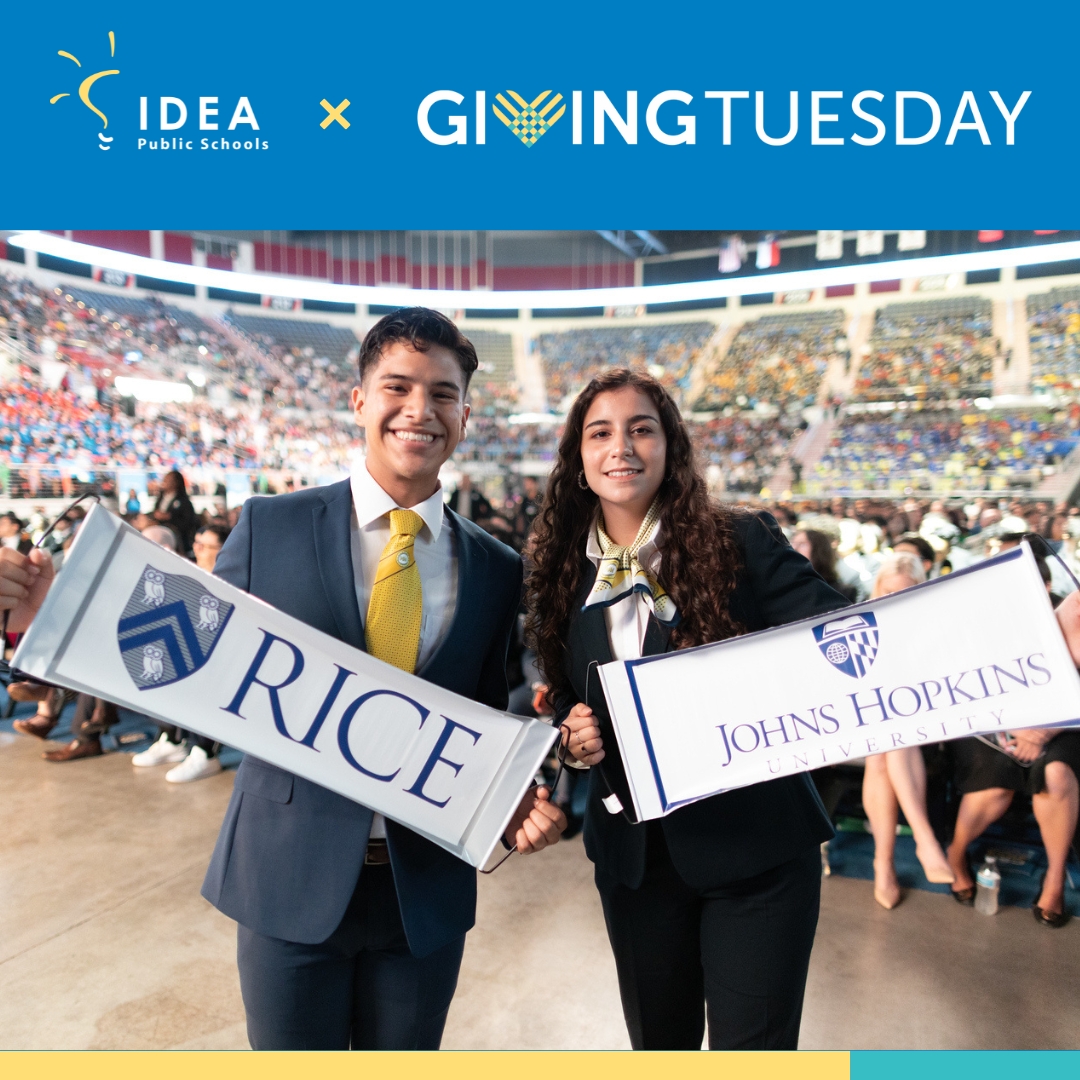 Support College for All today!

Donate today to create IDEA scholarships for scholars who face financial barriers on their path to and through college.