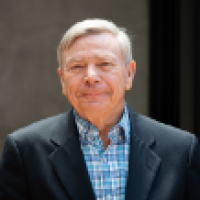 In addition to serving on IDEA’s fiduciary board, Mike serves as the Board Chair for the IDEA San Antonio Regional Board. His additional board memberships include the Southwest Research Institute, Great Hearts Academies Americas and Texas, Texas A&M University-San Antonio, the Cockrell School of Engineering at the University of Texas at Austin, Early Matters San Antonio and Greater Austin, and the Great Springs Project. Mike was the founder of the San Antonio Education Forum and the San Antonio Clean Technology Forum and was named San Antonio’s Education Champion in 2018 and the State of Texas Heroes for Children in 2020.

In the energy sector, Mike previously served as President and CEO of EOTT Energy Corp., a $12 billion publicly-traded company and the largest independent marketer and transporter of crude oil in North America. Before joining EOTT Energy, Mike served as director, President, and CEO of Tesoro Petroleum Corporation and led Texas Eastern Corp. in several senior-level positions.
Mike earned his undergraduate degree (B.S. Chemical Engineering) from Texas A&M University. He earned an M.B.A. (Marketing & Finance)s from the University of Texas at Austin.