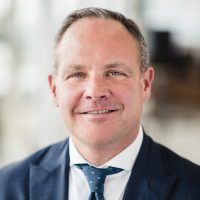 Collin Sewell is a son, husband, father, leader, and entrepreneur. His responsibilities span from serving his family to leading a team of over 500. Collin finds his roots in two hardware store families in the late 1800s and early 1900s. On his Mother’s side, the Meacham family left their hardware store in Fort Worth, Texas for the newly released Oklahoma territory. In Western Oklahoma, they laid their claim to their own homestead during the Oklahoma Land Run. On his Father’s side, Edward Franklin Sewell started selling Ford Model Ts from his hardware store in 1911.

As the Great Depression took its toll in 1929, E.F. loaded up his family and headed west for a new start. That new start landed them in Crane, Texas, just south of Odessa. In 1935, The Sewell family began their next chapter of the car business in Odessa, Texas. Brothers Woody and Carl Sewell purchased Sewell Ford in 1935.

Four generations and over one hundred years later, Collin Sewell is now the Proprietor of The Sewell Family of Companies, which includes:

Collin’s leadership in his family’s automotive dealerships and his people-focused efforts consistently promote living a life in service to others. Collin currently serves as a member for:

His past service includes: