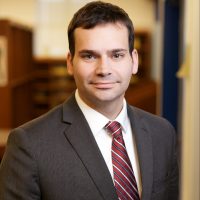 In his decade-long career at IDEA, Nate has proven that he is a committed, results-driven professional who is sure to make our vision of college for all a reality in Austin. Prior to his current VP role on the national Human Assets team, Nate served as a Vice President of Schools for the Austin Region, where he significantly increased principal retention, helped orchestrate school turnaround, and set strategy for 100% college matriculation at IDEA Montopolis.

Before serving in the VP of Schools role, Nate led IDEA Montopolis CP to be the only school in east Austin to earn a TEA “A” Rating in 2018. Additionally, Nate served as founding Principal of IDEA Weslaco Pike College Preparatory, the first campus to earn Best New Campus from IDEA Public Schools, as well as a spot on the Texas Schools Honor Roll.

In both years of his leadership, the school earned the state’s highest rating as well as all distinctions for which it was eligible. He has also led his teams of teachers and leaders to create opportunities for students not previously offered at IDEA, including the Mavs Book Bus literacy project, IDEA’s first tennis team, and a full-scale 6-12 Orchestra Program. While holding a high bar for excellence and meeting academic goals, Nate has kept a focus on development and retention: he has met teacher and staff retention goals in five out of six years of campus and regional leadership.

Nate is a proud Cornell University graduate and holds a master’s degree in Educational Leadership from Columbia. He strongly believes in holding all students and adults to high expectations. His dedication to our core mission and values, coupled with his ability to transform and innovate, make him the ideal choice to serve as IDEA Greater Austin’s Executive Director.