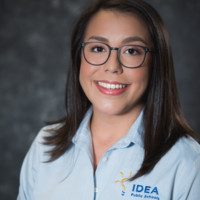 Leanne earned a Bachelor of Arts Degree in Political Science at The University of Texas at Dallas. She later earned a master’s degree in Applied Economics from Johns Hopkins University, Advanced Academic Programs in Washington, DC.

Before joining IDEA Public Schools, Leanne worked at the State of Texas Legislative Board in Austin and at the U.S. Census Bureau in Washington, DC. Over her tenure at IDEA, Leanne has served as Manager of Special Projects, Chief of Staff and Director of Financial Planning.

As Senior Vice President of Financial Planning, Leanne was responsible for IDEA’s Financial Operations including capital markets, banking and treasury, budgeting, and risk management. Her department played an important role in the organization by building balanced budgets that best support continued high academic performance at existing schools and the capital to support the launch of new schools and regions across all entities. She managed the Budget Team to guide and support financial stewards across the organization as they strategically plan and execute on financial and human capital. In July 2021, Leanne as appointed as IDEA’s Chief Financial Officer.

Leanne currently lives in McAllen, Texas and enjoys reading, working out and spending time with her family, especially her two beautiful nieces.