Preparing Our Youngest Scholars For Success
*Pre-K Program is only available in select Texas regions for qualifying families.

Welcome to Pre-K at IDEA

An IDEA Pre-K classroom is a great place to learn and grow. Our dedicated teachers track each student’s progress and match instruction to meet their specific needs. Our students have fun learning as they start on the road to success in college and in life!

IDEA’s Pre-K program is different and it works.

Is your child eligible for the Pre-K Program?

In Texas, to be eligible for enrollment in a free Pre-K class, a child must be at least four years of age on or before September 1 of the current school year and meet at least one of the following eligibility requirements: 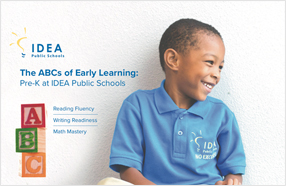 IDEA Travis in the Permian Basin region also offers Pre-K and is currently the only IDEA school to offer full-day Pre-K.

Small learning groups and tailored reading and math programs ensure each and every Pre-K student is learning at a level just right for them.

Through community events, parent-teacher conferences, and progress trackers, we work together with families to ensure there is no limit to what our Pre-K scholars can achieve.