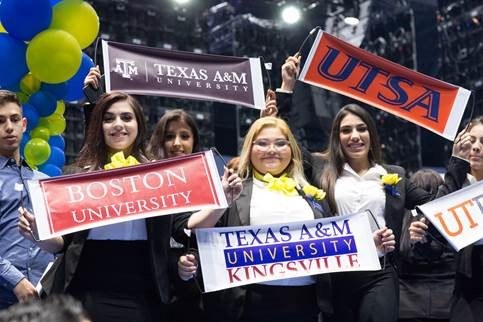 Since its first graduating class 12 years ago, IDEA has achieved a nearly 100 percent matriculation rate as the district continues to fulfill its unwavering commitment to College for All Children and ensure scholars are prepared to succeed in college and life. The network has maintained its near-perfect matriculation rate as it has grown to serve more than 44,000 students, across 79 schools, since 2000—more than any other charter school network in the nation during this time period.

The IDEA Class of 2018 was accepted to more than 377 colleges and universities across the nation, including 17 acceptances to Ivy League schools and received more than $46 million in scholarships. More than 590 graduates from the Class of 2018 are the first members of their family to attend college.

“Hitting nearly 100 percent college matriculation for the 12th year in a row is a huge accomplishment for IDEA Public Schools and one that multiple people across the organization work hard to achieve every year,” said Phillip Garza, IDEA Public Schools Chief College and Diversity Officer. “This achievement could not have been possible without the dedication of our faculty, staff, families, and students.”

Julissa Ann Garcia, a founding student and Class of 2018 graduate from IDEA Weslaco is attending Brown University in Rhode Island this fall and is majoring in business with a minor in theatre. Garcia, a Give Me 5 scholarship recipient says that while IDEA’s rigorous academics helps prepare students, it is the organization’s support to and through college that makes the biggest difference.

“I am thankful for the sense of community and family that I experienced at IDEA,” said Garcia. “Even though I am far away from everyone, I love knowing that we are still family and I can always call on them for anything I need, and they will always be there to support alumni.”

A 2018 graduate of IDEA Mission, Carlos Madrigal is currently studying electrical engineering at Northwestern University in Evanston, Illinois. Madrigal says he is thankful for the opportunities offered at IDEA, especially streamlining the college admissions process.

“My family did not know much about the college admissions process,” he said. “IDEA really helped guide us to understand the process of how to get to college and what to do once I am there, and I am so grateful for that.”

Like Garcia, he also stresses the importance of IDEA’s Alumni Affairs team and their work to ensure that each student receives their bachelor’s degree within four years.

“The support doesn’t stop once you graduate,” continues Madrigal. “There’s still a team at IDEA to assist you through college, they help you build a network of support and it makes a big difference.”

IDEA’s promise to our students doesn’t end when they are accepted to college. College for All Children is made possible by the talented staff, innovative programs, and a college-going culture. Through IDEA’s College Support Model,  our staff partners with families to see every student to and through college and provides students with a wide range of services and support even after they matriculate to college. IDEA’s Alumni Affairs team primary job is to ensure IDEA alumni have the resources and support they need succeed in college. Our Alumni Affairs Team checks in with alumni regularly via person-to-person meetings, phone calls, text messages, emails, skype sessions, and more.

“It is rare to find schools like IDEA who are this committed to doing whatever it takes to ensure 100% of its graduates matriculates to college,” adds Phillip Garza. “For the twelfth year, we have hit our acceptance goal, and achieved 99.88 percent matriculation, nearly 100 percent, and that is certainly something to celebrate.”

To learn more about IDEA Public Schools, contact Marco Carbajal at 956-272-4392 or marco.carbajal@ideapublicschools.org