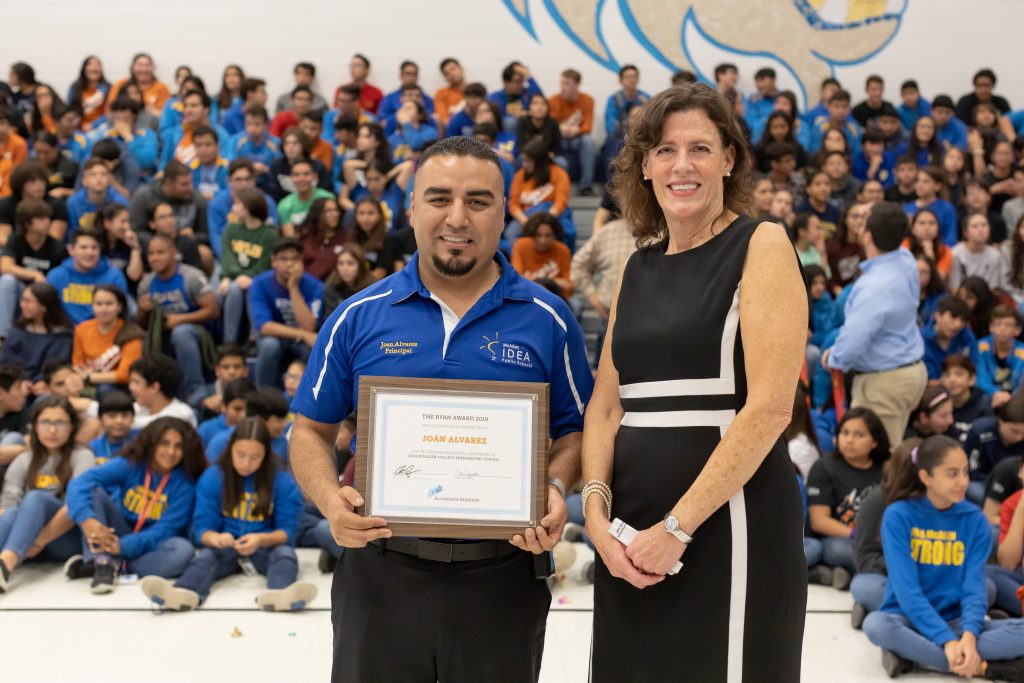 In a surprise ceremony in front of students, staff and family, IDEA College Preparatory McAllen Principal Joán Alvarez was honored with the Accelerate Institute’s 2019 Ryan Award for exceptional school leadership, a national award honoring transformational school principals who are closing the achievement gap. Alvarez is one of only two school leaders selected for the Ryan Award this year out of hundreds of school leaders nominated from across the nation.

Pat Ryan Jr., founder of the Accelerate Institute, said Alvarez was selected for the Ryan Award because he erases traditional barriers that may have stood in the way of student achievement. With his engaging, celebratory approach, Alvarez recognizes the strengths of each student, opening their minds to futures they may not have thought possible.

“Joán Alvarez has built a school culture that embraces constant growth, for his teachers, himself and his students, so that every individual student is given the opportunity to succeed,” Ryan said. “With this award, we want to amplify the story of leaders like Joán so other principals learn how to build schools with healthy foundations that enable their students to compete with their peers no matter where they go.”

Alvarez was nominated by Nicholas Ditto, founding principal at IDEA Rise College Preparatory opening in Fort Worth, Texas, this fall. Ditto says he nominated Alvarez for the honor not only for his students’ exemplary academic results, but also because of the way he treats his students.

“One of the most important things Joán taught me was the power of motivation and the importance of celebrating your students and staff,” says Ditto. “He never missed an opportunity to celebrate students’ growth and achievement, both on an individual and collective level. Additionally, he consistently praised and recognized staff for their hard work and strong results.”

Ditto also counts Alvarez’s personal connection to each of the students on his campus as a large factor in his success. “I remember being awestruck during my first week on campus when I realized that he knew all of his students by name, their student achievement data and personal facts about them,” Ditto says. “The deep relationships that he has been able to build have been instrumental in his students’ success.”

A first-generation college graduate himself, Alvarez started teaching in Corpus Christi, Texas, then earned a master’s degree in educational administration. He went on to become principal of his alma mater, Progreso High School. In 2011, he joined IDEA, serving as assistant principal of instruction at IDEA College Preparatory Mission. In 2012, he attended the Harvard Educational Leadership Program, and also founded the IDEA College Preparatory McAllen campus.

“I am overwhelmed and truly honored to receive this award. It speaks highly of the hard work of our students, teachers, and families,” says Alvarez. “I am proud of each of our students and the hard-working staff here at IDEA McAllen who are committed to fulfilling our promise of getting 100% of our students to and through college.”

The prestigious award includes a $25,000 honorarium and the opportunity for awardees to teach their successful methodologies to other leaders at a summer institute at Northwestern University in Chicago.

Alvarez is committed to ensuring that every student makes it to and through college and has pledged his $25,000 award to go towards student scholarships for IDEA McAllen’s first graduating class this year. Congratulations, Mr. Alvarez and great work IDEA McAllen!