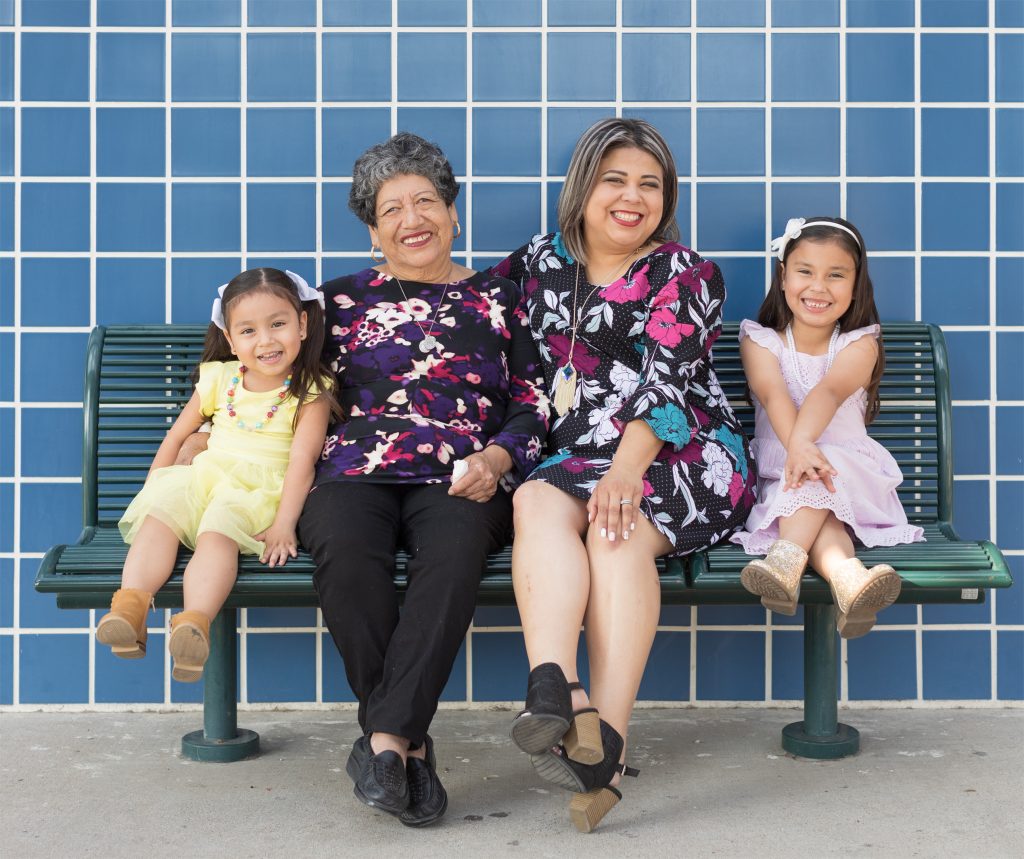 In May 2017, Luisa Ramos had to make a critical decision. Her second daughter, who was born with a kidney defect, was in need several surgeries much earlier than expected. The news came just as Ramos was also about to embark on her last summer session of school before completing her bachelor’s degree as a first-generation college student—an accomplishment that had been a long time coming.

Tired and overwhelmed, Ramos knew she had sacrificed so much in order to get her education, however, nothing was going to stop her from being there for her daughter. Luckily, Ramos had the courage to face both obstacles head-on, and it all stemmed from the strength that was given to her by her paternal grandmother as a young girl growing up in Progreso, Texas.

Her father worked as a security officer and mother was an iron presser for Haggar Clothing Company. Because her parents worked so often, Ramos and her brother would often happily stay with her grandmother, the beloved matriarch of the family.

“My grandmother is very special to me. She always encouraged my brother and I to succeed no matter what especially when it came to college since my father never wanted to go,” says Ramos as she tears up. “She is very strong independent woman and made it a point to tell me as a young girl that I can accomplish anything a man can do.”

Ramos attended South Texas ISD’s Business, Education & Technology Academy (BETA) in Edinburg and upon graduation, she says she began attending college simply because that’s what everyone was supposed to do.

“I was going to college because everyone I knew was going as well,” she says. “But in my third year, I got a really good job offer and decided to leave college and begin my career. I worked for several years and eventually met and married my husband Juan and became a mother for the first time. Life just happened and finishing my degree got put on the back burner.”

Ramos was now the mother of two young daughters, and when it came time to find a school for her eldest daughter, who was entering pre-K, Ramos chose IDEA North Mission because of IDEA’s reputation and her own schooling at a charter school.

Though Ramos had spent many years in the workforce, she had come to realize how difficult it was to advance in her career without a degree. It had been over a decade since she had been a college student, but the real moment of resolve happened when her daughter asked her a simple question during a homework assignment.

“She said, ‘Mommy, where did you go to college?’ And I told her that I had gone to college but didn’t finish and she just looked at me,” says Ramos. “I’ve always wanted to set an example for my girls to be strong and independent just like my grandmother did with me, and I felt that this was the one place where I was failing.”

Her grandmother encouraged her to go back to school as well, telling Ramos it was her dream to see her graduate from college. Ramos decided that it was time for her to lead by example and finish her degree once and for all. After inquiring at South Texas College, she was surprised to learn that her previous credits would allow her to complete her bachelor’s degree in just one year.

Ramos knew what going back to school meant. It would mean commitment and sacrifice. It would mean sometimes missing things when it came to her girls. But to her, the end would always justify the means if it means furthering her education and opportunities.

During spring finals in 2017, right before her last summer of school when Ramos’ youngest daughter began having complications due to her illness.

“We were waiting on two surgeries to be scheduled after her second birthday, but she had a lot of complications, so they ended up scheduling an emergency that May,” she says.

Exhausted and overwhelmed, she reached out to her Dean at South Texas College and said she was putting college on hold because of the surgery.

“She told me that it would put me back, and I said, I understand, but my daughters in the hospital and needs emergency surgery and will need another surgery in two months. I told her it was too much, and I couldn’t do it,” says Ramos. “And she said you can do it. You work forty hours a week. You have two kids. You’ve been doing it for a year. Trust me, you can do this.”

Ramos thought of her grandmother, her girls and the reason she had started this journey in the first place and persevered through a very crazy summer with the help and support of her husband and family. She finished her degree that August—becoming the first person in her family to graduate from college.

Her proudest moment was walking across the stage and receiving her degree with her girls and her grandmother in attendance and seeing her beaming with pride. She didn’t rest for long, however.

“One month before I actually got my degree, I saw a posting at IDEA Public Schools for an executive assistant and it required a bachelor’s degree. So, I went ahead and applied, and got the job and I’ve been here ever since,” she said.

Ramos is also planning to begin work on her master’s degree later this year. She says IDEA’s mission and core values like 100% Every Day and No Excuses have taken on new meaning on her educational journey.

“It’s not just about 100% college acceptance. It’s the fact that we’re instilling in these kids why they need to finish college. We use data to prove that barriers can be shattered and boundaries that can be crossed when you complete your college education,” she says with a huge smile. “An education can honor your past while changing your life, your community, and your world.”

My younger brother, Derek, attended IDEA College Preparatory Mission from sixth grade until he graduated last year. I was able to see firsthand the positive effects IDEA had, not just within himself but within our family. He was always doing his homework and made time for supplemental readings. IDEA’s rigorous curriculum helped him develop into a thriving college student. And to this day, he keeps in touch with former IDEA teachers, his principal and support staff. The close relationship my brother has with the educators and leaders is what makes IDEA the ideal place to work. I applied because of the person my brother has become because of IDEA.

Why did you want to work in education?

I took a substituting course after I graduated college as a way to obtain another certificate for my resume. During that time, I had to do a few observation hours and it worked out that I went to two different classrooms, a 6th grade Math and 6th grade English Language Arts Reading (ELA-R) course. The math class was the first period of the day and the teacher was so great at keeping the students’ attention so early in the morning, the students were so engaged and happy to be there. The second class I attended was a block period for reading. The students were not engaged at all. The class was the complete opposite from the first observation. It was the genuine interaction the math teacher had with her students and the lack of intention the reading teacher had with hers, that made me want to pursue teaching. I wanted to be the strong, genuine, teacher every student deserves.

What do you enjoy most about working for IDEA?

My experience with IDEA has been completely positive! Since I’ve started, the recruiters, principals, other Fellows and staff have been so involved and quick to help. I love that IDEA’s culture encourages teamwork and the leaders and recruiters find ways for the Fellows to build relationships with each other and with the school leaders. The communication between everyone has been amazing and very much appreciated. What I have enjoyed most is how dedicated everyone is at IDEA, not just the teachers and principals but everyone in all departments.

What do you want to accomplish during the 2019-20 school year?

I will be a co-teacher as part of my training in order to become a lead teacher in fall 2020. I am also working towards being a grade leader. I want to be the best I can be for my students and foster a positive, trusting environment for them.

Dalia is proof that a sibling rivalry isn’t always a bad thing! Sometimes it can lead to a blossoming career and a world of opportunity!