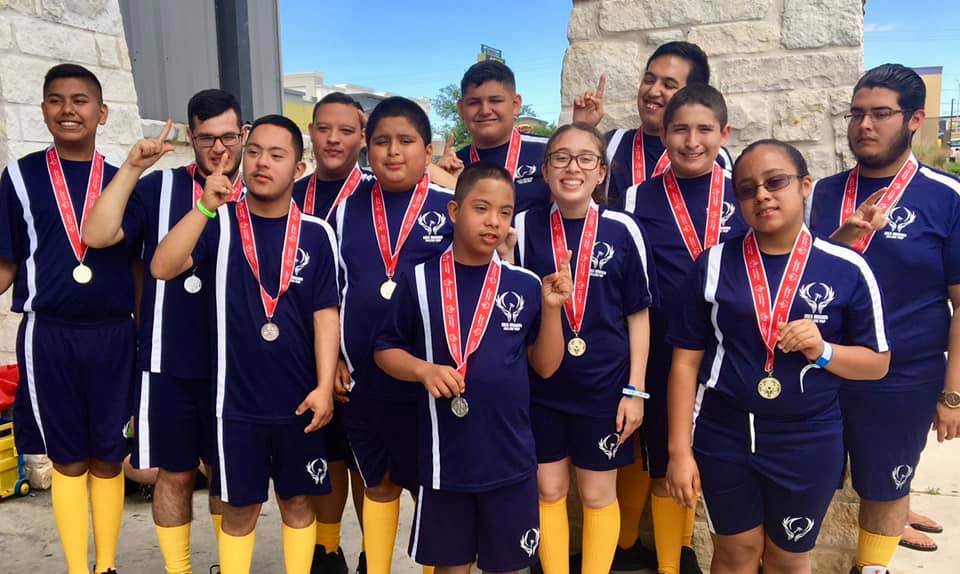 100% Every Day: IDEA Mission Rise Scholars’ Journey to Gold at the Special Olympics

Five years ago, IDEA Mission College Preparatory scholars began a journey that would ultimately teach them about sportsmanship, teamwork, and community.

As such, the campus was looking for ways to help RISE scholars become more active and involved in teamwork, and the idea to form a Special Olympics team for the first time was born in 2015.

The Special Olympics is the world’s largest sports organization for children and adults with intellectual and physical disabilities, providing year-round training and competitions to 5 million athletes and Unified Sports partners in 172 countries.

Competitions occur at the regional, state and national levels prior to the worldwide games every four years coinciding with each summer and winter Olympics games. Forming the team was easy. However, raising the funds needed to compete at the 2015 Texas Special Olympics summer games in Arlington, Texas proved more difficult.

“At the time, there wasn’t a budget in place for Special Olympics,” says Gaona. “We worked to raise donations from teachers and staff in order to purchase uniforms and our parents donated the money for our first banner.”

With just two months before the state games, there was little time to fundraise for lodging, meals, or transportation, so Gaona turned to her campus principal for help.

“I asked if there was any money in the budget to help us make it to the state competition, and she looked into the special education budget and there was just enough to pay for the hotel rooms.”

Gaona says the team was determined to make it to the state games, so they held a small meeting with parents, and everyone committed to selling food plates every Friday to meet their financial goal. The group also decided to travel in their own vehicles to the games.

Their hard work and determination paid off when the team took home the state title in track and field in May 2015.

The following year, Gaona and others created a Special Olympics budget with $500 and planned to fundraise once again for additional expenses.

“We fundraised for everything—new uniforms, necessities for local and state competitions,” she says proudly. “We became fundraising queens on campus with at least one fundraiser per month. But we knew that each of those scholars deserved a chance at competing and winning.”

Gaona says her principal at the time, Matthew Kyle, took notice of the team’s hard work and commitment and wanted to find a way to help.

“He wanted to see how much we were fundraising for travel, food, uniforms, and how many extra hours we were putting in on weekends without pay for competitions,” says Gaona. “Our financial goals get higher each year as more students with special needs become interested and want to join. We love our Team & Family and Mr. Kyle created a budget for us that lifted so much stress off our shoulders.”

During one of IDEA’s all staff calls, Gaona posted a question asking for a Special Olympics budget at the headquarters level and Chief Program Officer Dolores Gonzalez loved the idea.

“It has been a complete blessing to see these students work hard and know they have the support of their school, their community and their leaders,” says Gaona. “This is the second year that IDEA rented charter buses for our athletes in Special Olympics and offers per diems for food. We also continue to fundraise for food at local competitions and uniforms.”

While the success of her student athletes is certainly cause for celebration, Gaona says there is an even bigger lesson for all involved.

“The Special Olympics is so much more than just scores and medals,” says Gaona. “It gives them strength, self-value, self-awareness, acceptance, and has taught them how to love and care for each other as a team. They encourage each other to do their best and that mindset transfers back to the classroom. They are all winners in the classroom and out on the field.”